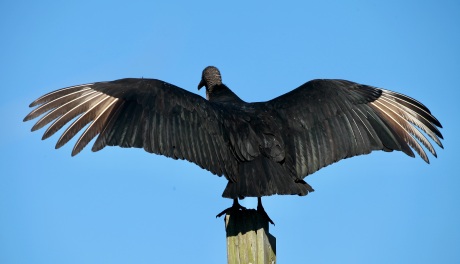 This Black Vulture above, at Merritt Island NWR Nature Center, appeared to be drying off his feathers in the manner of Cormorants and Anhingas. Another visitor said he’d seen the bird emerge from the water just beforehand – a behavior I have never observed, though Black Vultures are very common here in Florida.

But the Vulture behavior that really puzzled us was what we later saw at nearby Orlando Wetlands. We were literally surrounded by hundreds of Black Vultures – they were simply EVERYWHERE!! In the trees, on the ground, underfoot . . . we were nearly tripping over them on the pathways! 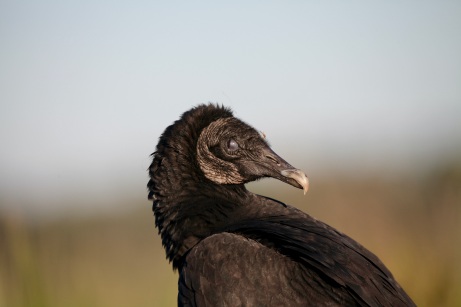 This handsome guy sat on the back of a bench (opening and closing his nictitating membrane from time to time), while everywhere we turned, more Vultures hopped right along with us on the trail.

They continued to be present in great numbers throughout the duration of our 3+ hour hike. In the distant trees they perched in droves as if waiting for some big event.

“Black Vultures feed almost exclusively on carrion, locating it by soaring high in the skies on thermals.” (Find much more info on All About Birds, Black Vulture). The Wetlands provide the type of habitat they frequent, but we just didn’t see any potential food source that would attract so many on this lovely morning. We never saw any of the Vultures feeding on anything, and none were soaring in circles overhead as we often see in the vicinity of landfills.

We asked some volunteers and later, some naturalist friends, and they all said that Vultures ‘just sometimes gather in groups’ like this.

Speaking of groups, note this fun fact from a site called African Conservation Experience:  “Vultures circling overhead, riding thermals as they search for carcasses are called a ‘kettle’. A group of vultures perched in a tree, meanwhile, are called a ‘committee’, a ‘venue’ or even a ‘volt’. Then, when the vultures descend to the ground to feed on a carcass they’re called a ‘wake’ which we think is beautifully descriptive.” ☺️

35 thoughts on “Where did all these vultures come from??!!”