It’s always exciting to spot a secretive American Bittern stalking around in the marsh. Unlike other herons who will often fly off when disturbed, the well-camouflaged Bittern will frequently stay right where it is, trying ever so hard to hide amongst the tall leaves.

To enhance the effect of pretending to be part of the plant life, “alarmed birds ‘skypoint’, swaying with the same motion as the surrounding wetland vegetation.” (Birds of Eastern North America, Sterry & Small, 2009). If you’re really lucky, he’ll stay right there, hiding in plain sight, till you take a few photos 😉.

Eventually, though, he’ll slink away and hide deeper in the foliage, like this beautiful charmer above did.

American Bitterns are known for their unusual, loud pumping ‘ong-a-chunk’ sound usually heard at night, but also in daylight hours during breeding season (Audubon Field Guide, Eastern Region, 2011). I’ve observed the stealthy American Bitterns on many occasions in our freshwater marshes and wetlands, but have rarely heard their unique vocalizations – maybe because they winter here in Florida, but breed much further north.

Watch and listen here for a 2-minute snippet of  the American Bittern‘s “…bizarre, resonant three-syllable pump-er-lunk call with a liquid quality.”  You can learn much more about this shy and elusive wading bird on All About Birds and Audubon.org. 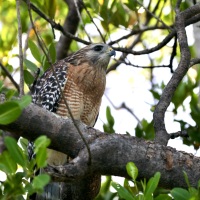