The Double-crested Cormorant is the most common Cormorant in North America (Audubon). So where are their double crests, you ask?? Oddly enough, the bird is so named because of two tiny, barely noticeable, tufts of black feathers that appear on its head ONLY during breeding season. Speaking of ‘tufts’, this fellow (not in breeding plumage) appears […]

A graceful Cormorant luxuriates in the morning by the waters’ edge. . .

No doubt about it, southeast Florida can be very hot in mid-August. So what do the birds do to keep cool?? Many birds, like Hawks and Wood Storks, soar overhead, circling above the wetlands to take advantage of high altitude currents where the air is cooler. Most birds try to keep their cool by being much less active […]

I just love living so close to our wetland preserves and sanctuaries. So many miracles of creation – every outing is a joy~!

During late Winter and early Spring, the preserves were bustling with activity.  The warblers and other migratory birds had arrived. The wading birds and other Florida natives were busy courting, nesting, and caring for their noisy chicks. And, the boardwalks were filled with nature-lovers of all kinds, enjoying our spectacular weather and scenery – families […]

This quiet, serene little Sanctuary has just the most appropriate name! Every time I go there, I see very few people, but lots of birds. And everyone I talk to who goes there says they have the same experience. It is a very peaceful place indeed ~ Last week I stopped by in the late […] 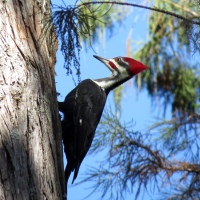